Krakow: The Most Desirable Destinations in Europe

Krakow is one of the most desirable destinations in Europe. It is no surprise – the beautiful monuments, picturesque Main Market Square, mysterious Kazimierz, romantic Vistula Boulevards, vast Blonia Common Green and endless night life attract people all over the world. However, Krakow and its surrounding areas offer not only interesting places to visit but also traditional and intriguing cuisine that is typical of the region.

Krakow is a centuries-old tradition city and the history is noticeable not only on the streets of Krakow but also in…. its cuisine. The best restaurants in Krakow derive heavily from the traditional cuisine of Krakow so that tourists can indulge themselves in unique flavours. The city has been constantly developing its catering facilities. Each year new restaurants and pubs are open to meet the needs of the most demanding customers. – https://discovercracow.com/tours-and-trips/food-tour-taste-of-poland/

The capital of the Malopolska Region is strongly influenced by Ukrainian, Jewish and Austrian cuisines due to divisions of the country in the period of Partitions of Poland. This ruboff was generally named the Galician Cuisine. 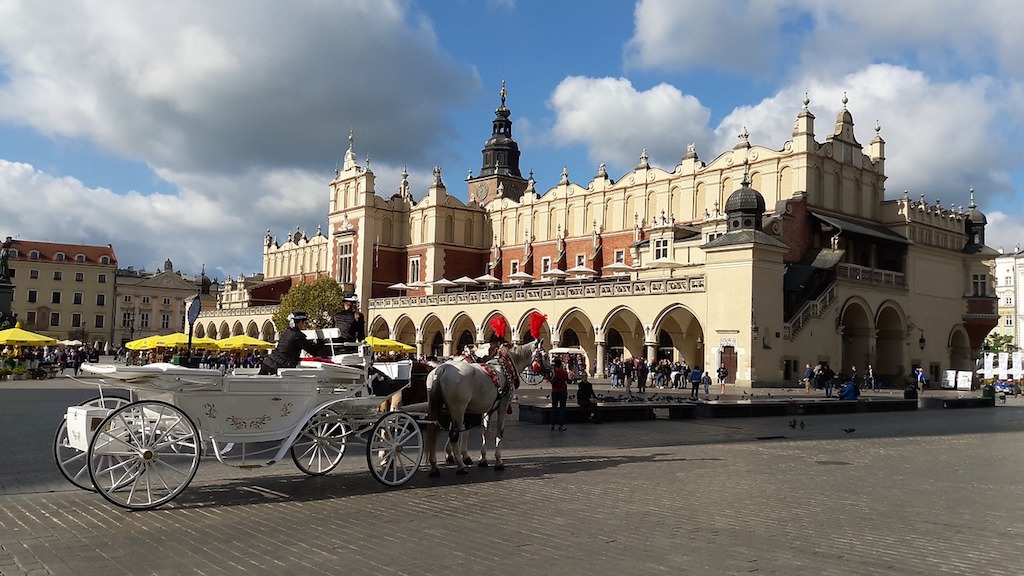 Starting with Austria, it was Krakow where the Viennese eggs were served for the first time, as well as the Wiener schnitzel and Viennese cheesecake. In the cuisine of Krakow those dishes caught on for good. Many dishes form the Jewish cuisine have also survived. One of the most popular are yeast buns called bagles. Besides, in Krakow there have been created its own variations of the recipes for the characteristic Polish dishes. An example are the Krakow style tripe – a soup which is prepared in a different way in each region, just like the stuffed duck which in Krakow is served with mushrooms.

When visiting Krakow you cannot miss obwarzanek which a ring-shaped bun usually sprinkled with salt, poppy seed or sesame. Its history dates back to the 13th century (the Middle Ages) when only bakers of Krakow were entitled to manufacture those traditional buns. Today, they are produced by the bakers of both Krakow District and Wieliczka District and sold usually at the steel street stalls, also outside Krakow.

If you fancy a visit to a restaurant instead of grabbing a quick traditional treat, try one of the most famous places in Krakow. – https://discovercracow.com/blog/polish-food-all-you-need-to-know/

So where to go hunting for sophisticated flavours?

Our culinary journey starts at the Wierzynek Restaurant founded in 1364 when a wealthy merchant Mikolaj Wierzynek hosted a splendid feast for the monarchs of Europe on behalf of the Polish King Casimir the Great. Today, at the Wierzynek Restaurant, this great medieval tradition of feasting has been continued and each of the guests is given a royal welcome. The Wierzynek’s cuisine is the essence of slow food – a combination of royal art of feasting and the highest quality of organic products from local suppliers. The guest can try traditional meats, pates, fresh fish and delicious dumplings, all prepared according to old Polish recipes.

Another stop of our journey is Pod Wawelem Kompania Kuflowa which is a 19th century styled restaurant with picturesque surrounding, located at the foot of the Wawel Castle. The restaurant serves delicious traditional dishes like the tasty pork knuckle, Silesian noodles and also fresh beer at very attractive prices.

And last but not least, the restaurant offering a delectable menu and sophisticated atmosphere – Pod Baranem. Each dish is prepared on customer’s individual request. However, the quality at the Pod Baranem does not mean prohibitive prices.

Krakow is associated mainly with its rich history and tradition but today it is also a city of different cultures and a diverse, fused cuisine. Most of restaurants and pubs offering multicultural flavours are located around the Main Market Square and in Kazimierz. Customers can try delicious dishes of Italian, French and Oriental cuisine, as well as quick treats sold in numerous food stands and booths. You can try tasty Belgian fries at Swietego Wawrzynca 16 or yummygrilled cheese baguettes with ham, mushroom and others (zapiekanki) served in NaMaxa Bar, the best choice according to the internet users voting.

One thing is certain, Krakow is full of tastes and offers a great variety of choices for every palate. Gourmets will definitely not be disappointed.